WARNING: This post includes no mention of Playstation games – my childhood consisted of Nintendo consoles and an Xbox!

I was an unbelievably boyish child – while girls my age were playing with Barbies or *shudder* Bratz dolls, I was playing video games. The consoles that consumed my earlier childhood were the good old Nintendo 64, and my trusty Game Boy Advance. It was a good childhood, and the games that I played as a child remain with me today – I doubt that I’ll ever really sell them!

Note: Most N64 games in this list were bought second-hand, and therefore were fully completed prior to playing.

This game was so unbelievably fun to play and run around in. Despite the game already being completed, I loved being able to run everywhere and play every level back to front. My favourite part of this game was the free reign I had – I didn’t have to be completing a level to play, at that age I was happy to run around outside Peach’s castle. Although, I was never able to beat the final Bowser boss as a child.

The classic Mario Kart began my love for racing games. My younger brother and I would play this game together all the time (and I would always win), and even now when I play it with my boyfriend, I can still completely dominate him!

I owned the Sapphire edition GBA, and my brother owned the Emerald edition GBA. The third generation of Pokemon featured in this game is easily the generation I can call a favourite (yes, even over the original!). I bought Pokemon Ruby to complete my collection and my Sapphire edition has all three legendary Pokemon at level 100, including nearly all third generation Pokemon. As a nine year old child, it was a pretty great achievement!

I was too much of a scared child to attempt the more difficult levels, despite my Dad unlocking them all, but I still loved completing the earlier levels with basically all possible cheats to prevent dying, and the multiplayer component was great!

What a great party game this was! However, it would take way too long. The mini games in this version of Mario Party were fantastic, and my house was always the house of choice to party at when I was in primary school, purely because of this game.

The Legend of Zelda: Ocarina of Time (N64) 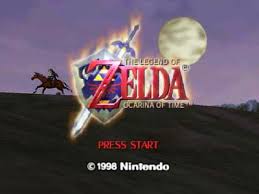 Honestly, I did not appreciate the pure amazingness of this game until I was much older. As previously mentioned, I was much too scared of dying in video games, so I used to run around as young Link in Kokiri Forest, talking to all the little characters. If I was brave, I would venture out into Hyrule field and ride Epona around and visit Kakariko Village to, once again, just talk to the villagers. Despite my fear, though, it’s such a timeless game that deserved its 3DS reboot.

Yet again – terrifying as a child. This game was so much darker than Ocarina of Time, being given only three days before a moon falls and destroys the world isn’t exactly cheery. In terms of interesting side characters and locations to run around in (so, basically, no gameplay actually occurred), I much preferred this game. My home N64 lacked the expansion needed to play this game, but my grandmother’s N64 had it so it was definitely a privilege to get to play it!

I loved these games! Such cute characters with free reign to run anywhere I wanted. The levels were still pretty good, too, and mostly wasn’t too scary for my little mind – although, Banjo-Tooie possibly scarred my young mind forever from a certain scene in Jinjo’s Village 😦

A big thank you goes to my grandmother for having The Sims 2 and a few expansion packs, and for letting me borrow them and install them at home to play. As a child who was significantly older than other children at my grandmother’s during school holidays, I liked to escape and play The Sims 2 every single day.

The games I played as a kid are ones I’d happily play again today, and I’m lucky to have owned physical copies of what are now classic games, and some are very expensive to acquire today! I don’t regret my childhood one bit, especially because it was this awesome!

There are plenty of Nintendo 64 and Game Boy Advance emulators for those wanting to try out these classic games – I myself use Project64 and Visual Boy Advance, shh!

Until next time,
Sarah May xx